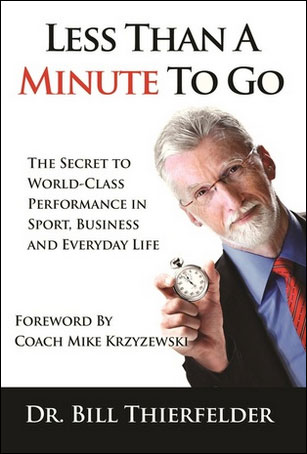 Dr. Bill Thierfelder knows what it takes to win. As a student at University of Maryland he dominated the high jump, winning fame as an All-American, and later as the Irish National Champion and record holder. Later he earned his doctorate in sport psychology. He became private coach and mentor to the world’s top athletes… and revealed to them his hard won secrets for success.

In Less Than a Minute to Go, Thierfelder teaches you the same powerful skills, showing how to perform at the highest levels both on the field and off of it.

Here Thierfelder shares the techniques he’s taught the world’s best athletes, from Olympians to Super Bowl stars. He shows how to develop an unyielding focus. And he flags the false motivators which can lead to burn-out and inconsistent performance, and which derail too many dreams of success.

Thierfelder does more than give peak performance techniques. In these pages he shows why sports are worthy of our deep attention and effort, whether as athletes or as avid spectators and fans.

He shows how sports can and should engage the highest parts of our nature-that, in fact, only when we are so engaged can we truly excel.

Where we all are players and where our choices have more significance than any World Series or Super Bowl.

Join Dr. Bill Thierfelder in an exploration of sport-and of life-as you have never considered them before.

Let this world class athlete, mentor and coach teach you what he has taught so many others, from college students to superstars: How to give your very best when the clock is ticking… Everything is on the line… and you have Less Than a Minute to Go.

Dr. Bill Thierfelder is President of Belmont Abbey college in Belmont, North Carolina. He lives outside of Charlotte, NC with his wife, Mary, and their 10 children.

All royalties received from the sale of this book are donated to Belmont Abbey College.

More About the Author

© Copyright 2014 By ThemeGoods All Right Reserved | Powered By Wordpress